So, you’ve been hiking and off-roading in Sedona? Have you done the Broken Arrow trail? No? Really? Well, it’s a very popular trail to go off-roading on.
I can’t believe you’ve never been on it. Not even with a Pink Jeep tour? No? Seriously?

{rokbox album=|album| title=|Shaitan ki Seediyan|}images/stories/2011/03.13/church.jpg{/rokbox} Yes, I am an avid & frequent hiker in Sedona. I’ve hiked from the arid desert trails to the lush green forests trails of Oak Canyon. I’ve even visited every vortex too! My favorite vortex? Chapel on the Hill, although it’s not an ‘officially’ recognized vortex. My first official off- roading experience with Henry was on FR152C which we took to the Vultee Arch trailhead. No, I don’t do Pink Jeep tours.

{rokbox album=|album| title=|L'escalier de diable|}images/stories/2011/03.13/sign.jpg{/rokbox} The Broken Arrow Trail, so what’s with all the ‘hub-bub’ around this trail? Should I be worried? Is it something that Henry can do? Hell yeah! I’m feeling confident & cocky coming off my fantastic experiences at the 2011 AZ Land Rover Rally. Plus, if Shaun (aka LR3/LR4 GURU) says Henry can do it, then who I am to disagree?? 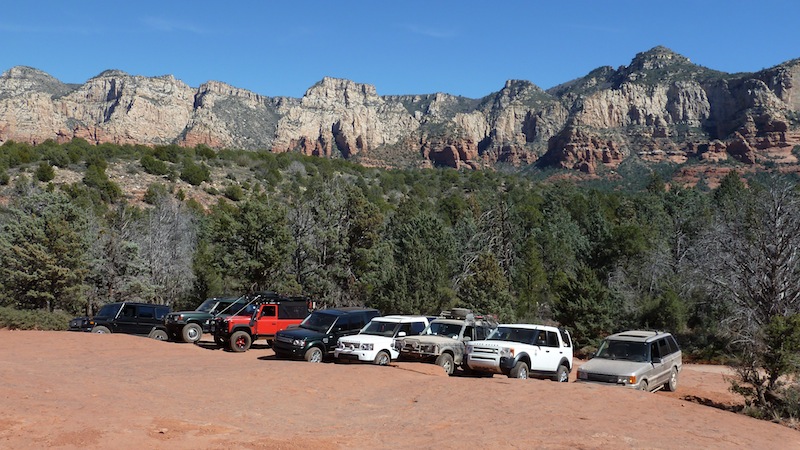 It is a beautiful and crisp morning in Sedona. The group meets up at Tlaquepaque. We have a respectable showing with me/Jim & pups(Henry), Puneet/Nalini & twins(LR4), Shaun/Colleen & kids(LR3), Jon C, Steve/Tonia(Discos), Glenn(RR), Warren/Wendy(Defender) & Bob (G Monster). The AZLRO club & rovers are well represented. A rainbow of colors were displayed, but alas, no PINK! Hmmm dark chocolate covered peeps....oops, I digress!

{rokbox album=|album| title=|Die Teufelstreppe|}images/stories/2011/03.13/monsterg.jpg{/rokbox} "To the trail”, Bob shouted over the FSRS radios, “to the trail, we go!” With that our Rovers convey, led by the German Monstrosity, headed out into the quiet, early morning streets of Sedona. “If you passed the big wooden Chicken, you’ve gone too far...” Woohoo, Henry gets the honor of being 2nd in the convoy! I like to think it’s because Bob likes the pictures I take of the G Monster, but I know it’s because I need a little extra attention. Bob, Henry has asked me to ask you to teach me how to avoid ALL the branches, twigs, brush, and everything else that scratches that I never fail to hit and that you seem to easily avoid!

{rokbox album=|album| title=|Shaitan di Paudiyan|}images/stories/2011/03.13/batcave.jpg{/rokbox} First Stop... the bat cave! I don’t know, it kind of looks like a big hole in the ground. Kids! Pups! Stay away from the edge. You don’t want to become bat fodder! Batman & Robin aren’t likely to be home & invite us down for refreshment. Hahah, it’s actually not even a bat cave, but a sinkhole called the “Devil's Dining Room.” Hmmm, perhaps we might be invited down after all for some refreshments, LOL. Wait... was that a Pink Jeep I just spotted?

{rokbox album=|album| title=|Scala del diavolo|}images/stories/2011/03.13/trailshot.jpg{/rokbox} Next stop... Submarine Rock! There are a few fun climbs along the way, which allow for plenty of great photo opportunities. Colleen was shooting up a storm, with Warren, Jon and me in a fight for second. The scenery was incredible. Kids, dogs and adults spread out around the rock. The sheer size of it was absolutely amazingly. Wait a minute, what is that over on the hill? No, not the Pink Jeep infestation in the parking area, over there! Look, look – over there. Could it be...Could it be? 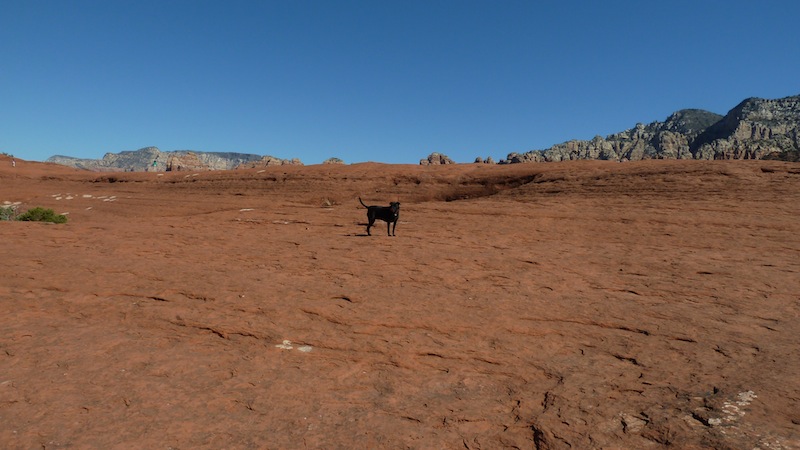 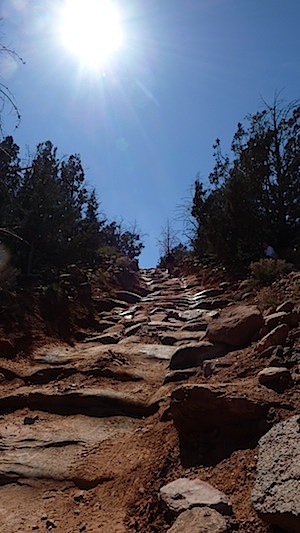 It’s been whispering to me all this time. Looming in the back of my mind. Can I do it? Can Henry do it? Will Henry get damaged? What does it look like? Am I scared? Please don’t make me have to have someone else drive Henry down the staircase. I park Henry at the top and try to contain my nervous excitement as I go peek at what el Diablo has placed before me. He has already claimed one victim, Wendy...luckily she is ok. Wow, the staircase is steep. Apprehension starts to creep over me. But then everyone rallies around me. Bob is waiting patiently and is ready to spot me down. Steve is to the side of me, cheering me on as I go by, Shaun, Colleen, Jon, Tonia, Wendy, Warren, Puneet & Nalini are below waiting – Jim is filming me. Glenn is up top watching over everyone & rovers alike. So, the descent begins. I take a deep breath and tell the girls to hang on, it’s gonna be a bumpy ride! Once the descent starts, I place my Henry totally in Bob’s hand and follow his directions. I seemed to slide down more of the staircase, than drive down – but I am glad I faced the challenge! It is times like these that make you appreciate the good people around you & show you the benefits of being in the AZLRO club. Thank you! Puneet follows directly behind me, showing me the ease in which the LR4 handles what el Diablo had to offer. Everyone else made it look just as easy. Bob and Jon both decided to kick it up a notch by racing up the staircase and back down for kicks & giggles. Naturally, the story of Chad M racing up the staircase was then told...it leads one to wonder, was Chad possessed by el Diablo?

For our next rock climbing challenge, not only did I have the benefit of my partners in crime, but of a much more expanded peanut gallery of hikers and other 4x4 vehicles. There were many looks of surprise & awe as our Rover Convoy traversed Broken Arrow Trail #125. For newbies, like me, you have to wage an inner battle around letting go of how you might drive other vehicles and trusting that Henry knows what to do, when to do it and will get the job done, if you let him. All the spectators were impressed when they saw how easily the various rovers tackled the obstacles. {rokbox album=|album| title=|More Broken Arrow|}images/stories/2011/03.13/henry.jpg{/rokbox} {rokbox album=|album| title=|More Broken Arrow|}images/stories/2011/03.13/puneet.jpg{/rokbox} {rokbox album=|album| title=|More Broken Arrow|}images/stories/2011/03.13/glenn.jpg{/rokbox}

Another advantage of going out with a group is the opportunity to learn about your vehicle, what it can do and how to drive it properly. It is fun to watch the more experienced drivers tackle harder obstacles. Everyone gets to add a little spice into the adventure, whether it’s going up a staircase, crawling up and down a tall ledge or perhaps even straddling a ravine. What makes it special is that you get to share your adventure with some pretty fantastic people.

After a quick spin around the Mushroom, we headed back into town for a little Mexican food, but not before I personally received a compliment from one of the Pink Jeeps, on how well organized we were & how easy it was to work with us. Kudos to our fearless trail leader, Bob and to the group! 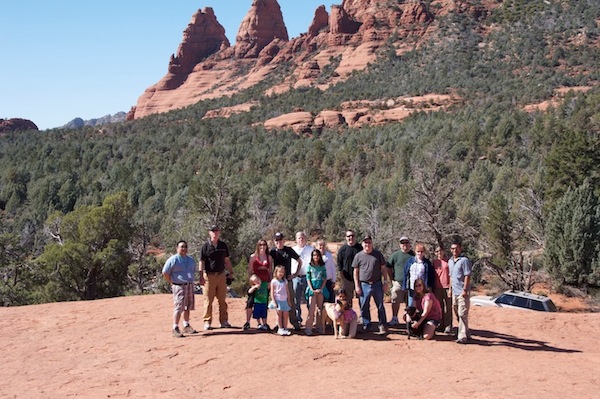 The Broken Arrow Trail – March 13, 2011
Sedona, Arizona
*Special thanks to Colleen & Shaun MacDonald for the use of some of their photos. The Devil’s Staircase Translated: Spanish, Czech, Hindi, French, Polish, German, Punjabi, Italian