It started out much like any other day I have plans to head to Crown King....I was running late. Shocking surprise! Jim had posted that he intended to do a little exploring around Crown King and I had every intention of getting to Cleator by 10:00 am.

9:21am Eeek! I need to get out the door. I go out to the garage to load the fridge and all of a sudden, I’m on the freeway. No camera, no dog, never went back into the house. As I drive down the freeway, I wonder why all the Sunday drivers are out in force on a Saturday. Don’t they realize I had somewhere to be and for heaven’s sake...the speed limit is 75 mph which means you go 80, not 60....ahhhhh!

Finally, I hit the Crown King exit, no time to air down, late...late...late! This ride wasn’t like butter. It was quite bouncy with bigger tires at a higher PSI. Why do I always underestimate how much time it takes to get to Crown King (and Cleator)? Passing many rigs along the way, Cleator is within in sight at 10:15 am. My huge dust cloud engulfs me as I come to a screeching halt at the bar. Then crickets...no one’s there. I look high and low...could they have just left? I look far and wide, nope no active dust cloud. I sigh and shake my head. That will teach me to be late (yet AGAIN!).

Undeterred, I decided that I would venture out on my own. I would try Senator Highway. Last weekend, we did the Mayer-Goodwin road and then headed towards Prescott so I still had a piece of the highway to explore. A while back, I had attempted it on the way towards Horse Mountain, but because the road was quite rocky and I had the 20” rims on, we turned back. I felt it was a good candidate to do alone, as I knew it was not a difficult trail, I had my new tires and the road was relatively well traveled on weekends. So if something serious happened, I would be able to get help. 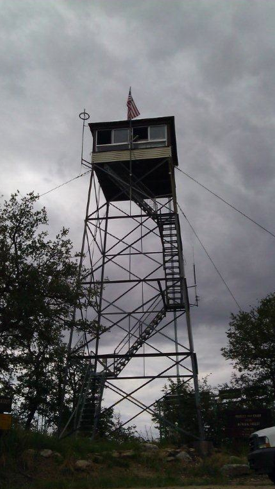 I had forgotten to get my lesson on how to work my Powertank the other night at our club meeting, so that was weighing heavily on my mind. I really didn’t want to have to pump back up my tires w/my air compressor. I decided to seek help at the Crown King Saloon. There were J**ps everywhere. It turns out that the Virtual J**p Club was having a get together / camping thing. Henry was but a lone Rover amongst a sea of J**ps and ATVs. Luckily I was able to find a couple of guys who were willing to assemble my Powertank and show me how to operate it. And to think, I told my sister, if she even thought about buying a J**P, I would have to revoke her AZLRO membership. LOL. Those J**P guys are all right and good people. The peanut gallery kept asking if I had helium in the tank, so I could make my voice sound silly. I think they may have already found the ‘gas’ that made them sound ‘silly.’

Off I went. I headed out of town and unbeknownst to me, onto the wrong road. Initially, I kept thinking, wow this road is a lot more groomed than I remembered it being and geez, nothing looks familiar. It was a beautiful day, temps were at 73 degrees, a nice breezy and it was just Henry & me! So I settled back and enjoyed the drive. When you are out alone, it gives you more time to enjoy your surroundings. Henry would tell me to slow down every so often if I started to go too fast.

The scenery was gorgeous, the road, while not difficult, was entertaining and I had nothing but time on my hands and music playing which necessitated me breaking out in song. Could a day be more perfect? Driving along, I suddenly came to a dead end at the Horsethief Lookout. I decided to take a moment and look around. No sooner than I stepped out of Henry, a voice from above called out a welcome and invited me to come up. What fun! I had been hoping I would be able to check out the look out. It was amazing how far you could see. I could even see my mountains...Daisy Mountain & Galvin Peak. The watcher was so kind and nice. He pointed a lot of the major landmarks. Because it was overcast and a little hazy, we couldn’t see the San Francisco Peaks or downtown Phoenix. He was also the one who told me, I wasn’t actually on Senator Hwy, but rather FR52 and that I would need to double back almost to Crown King to pick it up. Oh well, it was a great drive and definitely worth the misroute. Besides, I was exploring wasn’t I? And I found a pretty cool place. I told the watcher that I would organize a club trip and we would come and visit. He was really excited and couldn’t wait to see us.

Time to head back out. I retraced my way and was back on Senator Hwy, going the correct way. It was a great drive and would indeed make a great club trail run. Both Senator Hwy and FR52, while not difficult, have a lot of twists, turns, hills, and sights which make it fun to drive and suitable for any Rover. I did spot a couple of ‘play hills’ for added challenges.

I decided to take the Goodwin-Mayer road out instead of going all the way to Prescott. I was so proud of myself when I aired up my tires with my Powertank. It was a perfect ending to a perfect day. I’m glad I decided to continue on and go exploring alone. Not only did I make some new friends in my explorations but I got to spend some quality alone time w/my boy toy. Priceless!