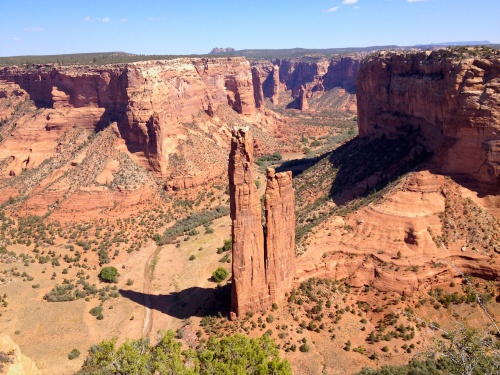 Canyon de Chelly was established on April 1, 1931 as a unit of the National Park Service. It is located in northeastern Arizona within the boundaries of the Navajo Nation. It preserves ruins of the early indigenous tribes that lived in the area, including the Ancient Pueblo Peoples (also called Anasazi) and Navajo. The monument covers 83,840 acres (131.0 sq mi; 339.3 km2) and encompasses the floors and rims of the three major canyons: de Chelly, del Muerto, and Monument. These canyons were cut by streams with headwaters in the Chuska mountains just to the east of the monument.

Canyon de Chelly is unique among National Park service units, as it consists entirely of Navajo Tribal Trust Land which remains in the ownership of the Navajo Nation and is home to the canyon community, while park matters are administered by the National Park Service. Access to the canyon floor is restricted, and visitors are allowed to travel in the canyons only when accompanied by a park ranger or an authorized Navajo guide. The only exception to this rule is the White House Ruin Trail.

Most park visitors arrive by automobile and view Canyon de Chelly from the rim, following both North Rim Drive and South Rim Drive. Ancient ruins and geologic structures are visible, but in the distance, from turnoffs on each of these routes. Tours of the canyon floor can be booked at the visitor center and at lodgings in the vicinity of the canyon. There is no fee to enter the canyon, apart from any charges imposed by tour guides.

Accommodations for visitors are located in the vicinity of the canyon, on the road leading to Chinle, which is the nearest town.

The National Monument was listed on the National Register of Historic Places on August 25, 1970.

The park's distinctive geologic feature, Spider Rock, is a sandstone spire that rises 800 feet (240 m) from the canyon floor at the junction of Canyon de Chelly and Monument Canyon. Spider Rock can be seen from South Rim Drive. It has served as the scene of a number of television commercials. According to traditional Navajo beliefs the taller of the two spires is the home of Spider Grandmother.