After a pit stop at Circle K. Ms. Diana, Mr. Rob, Mr. Jon, Ms. Daria, and Ms. Diana’s mom were traveling in Henry the IV, an LR4. Papa, mommy Appu uncle, Usha and I were traveling in another LR4 behind them. We were all on our way to see the ruins of the Salado Indians and the beautiful waterfall next to it in Tonto National Forest, after reading about it in Arizona Highways. {rokbox album=|album| title=|Sierra Ancha :: Trip Photos|}images/stories/2011/sierraAncha/P1010168.JPG{/rokbox}

To reach the Sierra Ancha Mountains, one must embark on a two-hour drive through tarred roads via US-60, 188 and 288 to Cherry Creek road. Once at the entrance, we aired down the tires and drove slowly down the bumpy, twisty washboard road for about twenty five miles. There were four stream crossings, the second was the widest and the third one was near Ellison Ranch. Just after the ranch the trees grew bigger, in keeping with the riparian habitat and their long, silky green leaves bordered the path. The next two miles involved shifting into low range for better control. The path was strewn with rocks upto 8 inches with the occasional larger rock in between. Soon enough we reached the last stream. This was the deepest and had a short but steep climb out on the opposite bank. We reached the trailhead at 11:40, and decided to eat a quick lunch. At 12:00, we started on the trail. {rokbox album=|album| title=|Sierra Ancha :: Trip Photos|}images/stories/2011/sierraAncha/P1010180.JPG{/rokbox}

The first half of the trail was the hottest, dustiest, and the most strenuous. However, this arduous trek was well worth it, for the prickly pear cacti had just opened up their gorgeous purple-pink blooms. After many photo and rest stops, we finally escaped from the harsh, stinging glare of the sun. Greener, thicker vegetation stood along our path, sometimes even crossing it. This was hard on our hands. We were forced to clutch the branches and twigs of all plants closest to us to make it up and down the steep hills and slides. There was a ledge with expansive views and soon after the arid vegetation gave way to a bright green: The narrow path was shaded by big tooth maple and lined by moss and fern. A giant cliff face greeted us, and the path leveled giving our hands and legs some respite. Two hours in, we reached our first destination: the ruins. The houses were in good shape, after surviving more than eight hundred years in nature. There were two unconnected structures, on with three rooms and one with only one. Next to, and behind the first was the uranium mine of the 1950’s. At the entrance was an almost (but, not quite) fluorescent deposit on the walls that we determined to be Copper patina. To the mine itself, there was a main and two perpendicular passages that we explored. The one on the left had a long hose that in the dim light of an iPhone light was construed to be a snake by papa!! Then Mr. Jon and Ms. Diana brought their flashlights and we went deeper onto the main passage for about forty feet. But, all three passages were dead ends. At the junction of all three was an overhead shaft that was dripping water. We wandered back out and continued on our hike. After a time we hear the gentle murmuring of water. Everyone picked up the pace, striding past all the flowers, till finally we reached the waterfall. It was indescribable, words cannot do it justice. A huge, gossamer, shimmering cascade stood before us. The initial fall had a drop of about eighty feet. We quickly made our way down and ate a snack while hopping on the stones and dipping our toes in the water. Many surprises were there. On the way down a frog jumped on Ms. Diana! She literally took that in her stride. Then, the group packed up and started on our way back. We all regretted having to leave, but it was already 2:00.

After about half an hour of walking back, we made a wrong turn. We came out a little dustier than we should have, as we slid down on our backs on the steep decline to meet the actual trail. We kept going for another hour, feeling rejuvenated and cool after the cool breeze from the falls and also the sun was on the other side of the mountain and fading. We reached the cars tired but glad to have seen the ruins, the mine, and the waterfall. When we reached 288 from Cherry Creek we saw the sun setting over Roosevelt lake and soon after cresting a short hill were greeted by a full moon that almost seemed within arm’s reach. All said it was beautiful day on the trail with good company. A hike made possible by our trusted (modern day) steeds. Here’s to the next trip ;) !

See the rest of the photos 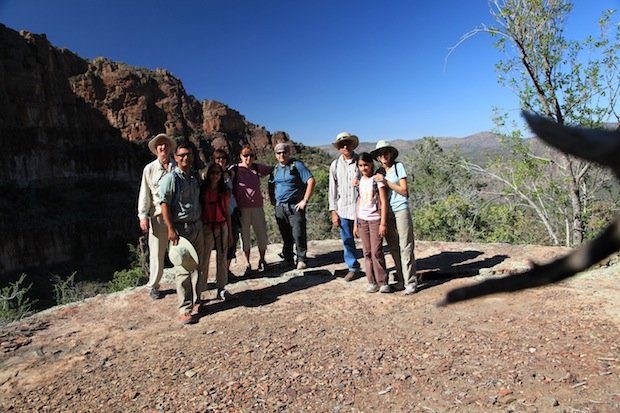