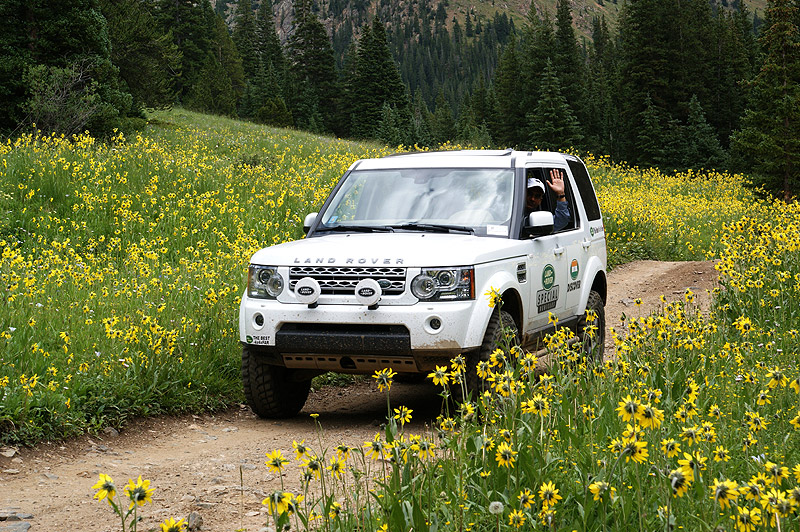 {rokbox album=|album| title=|Solihull National Rally :: |}images/stories/2011/solihull/6.jpg{/rokbox}
We saw two complete rainbows we drove under the arches. A good sign I thought. There was some evidence of the recent fires there. Unable to find vacant rooms at Chinle, over the Lukachukai and into New Mexico and thence to Colorado where we sheltered for the night. The next morning saw us through the San Juans to Durango. What a beautiful drive onwards to Silverton through thick coniferous forest and mighty stands of aspen. Waterfalls everywhere. Through many a former mining town we went. The going was slow due to the twisty roads and mountain grades but this gave more time to enjoy the scenery. On to Ouray and then Gunnison till we finally reached the outskirts of Breckenridge.

The place was ahh so beautiful but I was disappointed. I expected the small mountain town to be crawling with Rovers, but alas! I saw only one down main street. And it was an LR4 (I dont think he was there for the rally as I did not see him the following day) I called my backup: Doug, and was told that all the Rovers were parked next to the hall where the welcome party was. I went to the registration center and on the second floor was Warren, waving us up. We met Warren, Wendy, Dave and his son Cody, Steve and Tanya, and Michael and his friend.

{rokbox album=|album| title=|Solihull National Rally :: |}images/stories/2011/solihull/1.jpg{/rokbox}
The next day was when the "action" began. It was a clear, cool and crisp morning at 9,800 feet. We were all in the same lineup and chose to run the North and middle fork of the Swan river. We aired down. Steve was the tail gunner and I was ahead of him in a 12 truck lineup. We had DIs, IIs, a couple of Defenders an RRC and my LR4. Quite the group. We started off through a thick forest and I saw a couple of beavers...Through a shallow stream and up, up and up we went. There was some mud that was flung around by spinning tires and a 3 foot high rock that stopped the rig ahead of me for two seconds. His wheel spun and he climbed over it. By the time my turn came, what must have been a two foot rut ahead of the rock when the first vehicle reached was now three, I banged hard on my slider and with nary any wheel spin was above it.

I had gone a hundred fifty feet through dense woods where I could see neither my lead or tail vehicle when the radio crackled: This is Steve, I'm stuck and need help...There was a quick response: This is Doug from AZLRO and I'm headed down. Well, I was closest and reversed my truck as far back and down as I could and then walked down the steep muddy decline. Steve's disco had the front wheel over the rock ledge with the rear right tire unable to clamber up and spinning, spinning. Taylor, who was in a D110 a few {rokbox album=|album| title=|Solihull National Rally :: |}images/stories/2011/solihull/2.jpg{/rokbox} vehicles ahead of me spotted Steve. At first we thought he may need to be towed out of that spot but after a few attempts and change in line he made it up. Our car lineup meanwhile had extended so long that in the few minutes it took for Steve to change course and come out, Doug was still hiking down from the very front. Next came the problem wedge...about six-seven feet wide with a 25 degree driverside downward camber and a rut to the left with an embankment out of which jutted thick tree roots. Nalini and the kids exited the vehicle to take pictures. Meanwhile the thought flashing in my mind was how Nalini would respond when I took down the entire left paneling. Gulp. On three wheels I made it across the entire fifty feet or so of it. Whew...

Next up was a deep rut in which the three vehicles immediately ahead of me: The D110, the DIs all got stuck and were balancing on three wheels and needed to be winched out with two sturdy trees ahead serving as anchor points. While helping them out I realized that it was poor tire placement that got them in this predicament and was able to go through without a problem (just as well as I am not winch equipped). Soon we were above timberline and the views around us were magnificent...Snow capped peaks all around...and green grass and high alpine meadows with carpets of flowers... We stopped by an old abandoned cabin that is apparently stocked by passersby with food and other items. Time for pictures...

In the far distance was a rutted trail that forked into two and there we could see a yellow jeep that had obviously taken the wrong fork and was struggling as a result of that decision. Well, back down he slid, gravity helping him and chose the left fork and after a few slips made it up...That is what we chose then...The RRC ahead got truly stuck there for a few mins. Taylor spotted him, and with a change of line and some wheel spin out he was...Soon after we saw a herd of mountain goats with scraggy fur...what a sight. They settled on a ridge a few feet below us. A thousand, collectively, photographs, later, off we were...Through a snowfield...Well we soon heard that the trail leader was lost...I think this got Doug a little jealous because it had never happened on an AZLRO rally....In any event after getting directions from a drunk jeep driver we were soon headed on...the trip down followed a babbling brook down a steep ledge with a rock where (unintentionally) I banged the other slider, well atleast I was fair to both sides!! Through a sunflower meadow, next to an old abandoned camp and finally a beaver dam where we aired up. we headed back to town and met in the evening for dinner. The AZLRO crew.

Next day Naini, the kids and I went white water rafting on a classII/III. A pretty stream with crystal clear water at 40F splashing on us. Bliss in the high country...

The last day as kismet would have it saw all of us in the same runup line and completely unplanned at that. Peak 10 it was. Once again the Rovers began their climb up. Above the tree line we went through a rutted stream bed with water from an adjacent snowfield. The snowfield even had a hardy soul with telemark skis hiking to the top (we saw him skiing down later). Well, its all about the proper equipment. Ours let us go on much farther!!! Riding our trusty steeds in the thin air, we climbed to 13,300 feet through numerous switchbacks with 3 point turns (all but the Defender)...The trail came to an end at a rocky boulder field. Doug and Cody hopped out of their Disco and started hiking up to the peak that was 500 feet higher. Soon most of us were right behind them (they couldn't have exclusive bragging rights to this could they?). The heart was pounding from the simple task of breathing at this altitude and the climb to the peak saw it racing even more. Ahh!! After several panting breaths there we were the AZLRO crew at 13,800 feet.

{rokbox album=|album| title=|Solihull National Rally :: |}images/stories/2011/solihull/7.jpg{/rokbox}
The views were sublime. The crystal lakes with their Rover group of vehicles waaay below us. Soon enough we saw a small plane with its droning engine above the clouds that were a few thousand feet below us too. A fitting end to the day....Nalini, Usha, Naina and I soon headed back into town and thence to the journey back home. A good time...